Will the next Parliament be more tech-savvy?

By Till Sommer, Senior Consultant, London & the London Technology Team 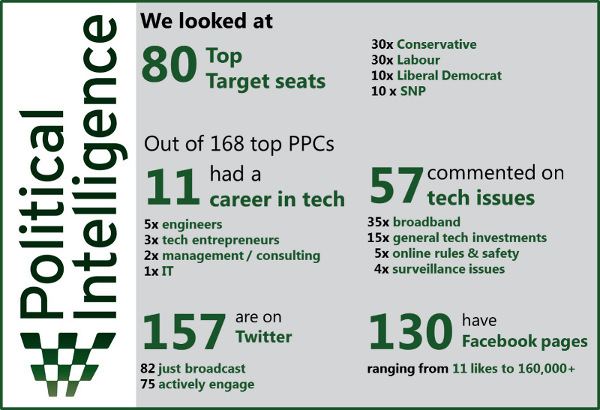 It is fair to say that technology has not been a strong suit of Parliamentarians in recent years. The last Parliament demonstrated time and time again that only a few MPs had a genuine interest in or understanding of technology. What’s more it was quite striking how even seasoned senior politicians became less assured when the Select Committee session or debate in which they took part turned towards matters related to technology.

Claims such as the advance of ISIL in Syria and Iraq being entirely due to the use of Snapchat or WhatsApp may at first sound amusing but they actually display a worrying lack of engagement with technology issues. This threatens to undermine the ability of Parliament to understand and make policy that is fit for the modern, digital world.

With this in mind Political Intelligence has looked at the 80 seats that are most likely to change hands at the General Election on 7th May to determine whether the next cohort of MPs is likely to display a better understanding of technology issues.

Our findings are not too promising. Of the 168 Prospective Parliamentary Candidates (PPC) that are in contention for the target seats, merely eleven previously held a tech-related occupation, with engineering being the most popular previous technology career.

Things look slightly better when we look at the campaign itself, with 57 PPCs raising tech-related issues on their campaign websites. However, unsurprisingly, broadband and mobile connectivity take the top spot with comments on general tech investment and start-ups coming a distant second. It is worth noting that despite the Liberal Democrats’ strong stance on digital rights only three of their PPCs’ made prominent remarks on this issue and the LibDems’s plans for a Digital Bill of Rights.

Looking at the PPCs’ use of social media, it is perhaps surprising that 10 are not even on Twitter. The remaining 157 are roughly split into two types in their approach to Twitter. 82 mainly use their accounts to mainly broadcast their campaign activity while 75 display more active engagement with their followers. Speaking of followers, the numbers stretch from 37 to 168,000 although it can be argued, that Shadow Chancellor Ed Balls has an unfair advantage over his fellow PPC. The highest number of followers of a PPC with no previous national political role is Rowenna Davis who is standing for Labour in Southampton, Itchen and has gathered 16,200 followers in her previous career as a journalist.

130 PPCs have pages on Facebook although none of these can be regarded as particularly successful given that eight of them have less than 100 likes with Spencer Drury, the Conservative PPC for Eltham coming in last with just 11 likes. Alex Salmond who is hoping to make the switch from Holyrood to Westminster is leading the pack with more than 162,800 likes. Of the PPCs who did not have a previous political career, the LibDem Maajid Nawaz who is a long shot in Hampstead & Kilburn, takes the lead with more than 20,600 likes gathered in his role as Chairman of the think tank Quilliam.

What does all this tell us about the next Parliament? Overall, it doesn’t look like that much will change The PPCs in our 80 target seats do not have a strong connection to the tech industry, are not particularly adept at using social media and if they like to talk about technology, they mainly talk about broadband, often a local policy concern. However, all this is probably as much a reflection of the MPs’ background as it is of their constituents’ communications behaviour and interests. While social media is a useful communications tool, a large chunk of the electorate do not live and breathe politics, so a knock on the door in the last week of the campaign may still be more effective. Broadband is top of our issue list because constituents actually mention it in surgeries, while a lot of other key technology issues are not really in contention in an election that is mainly about healthcare, immigration, welfare and public spending. Whilst this may point toward another Parliament that lacks tech credibility, it is worth taking into account that some of the more considered Parliamentarians during the last Parliament did not have a specialist background Moreover, the ubiquity of tech and social media in everyday lives means that it is harder and harder for tech to be treated as a niche issue.

In 2014, we ran a survey among MPs which indicated that the majority believed that the technology sector as a whole is not good at engaging with MPs on policy development. The survey also indicated that almost a third would welcome the tech industry providing education for policymakers on how technology works.

Given that the next Parliament will not be too dissimilar from the last, we would argue that there is clear case for proactive engagement with the new Parliament. However, this engagement needs to go beyond simply educating policy-makers about technology and provide clear arguments for why tech issue matters to MPs and their constituents. In a modern connected world, where almost every policy will have some sort of technology or communications element, this is more important than ever.

We are working with a number of current technology clients on strategies to ensure that their issues matter in the next Parliament. If you would like to consider an initial strategy workshop to discuss your current plans post-election or would like to discuss ways in which Political Intelligence could support your organisation, please do not hesitate to contact us on 020 3397 3300 or email our Group Managing Director Nicholas Lansman for further information.