Amidst intense speculation over which cabinet ministers will campaign to leave the EU, and with many expecting the Referendum as early as Thursday 23rd June, we have compiled a list of the key players in each camp. The respective teams include key campaign individuals and senior industry representatives as well as ministers and other political heavyweights.

However, it is unlikely that our fantasy elevens will look the same come polling day given that ministers have agreed not to challenge the PM on renegotiation efforts until a final deal has been agreed. With this in mind, we have also prepared a “fence bench” – in lieu of any confirmed transfer activity just yet. The bench contains our top picks for those most likely to switch sides late in the day, or to join the fray and make an impact once renegotiation efforts have been completed.

Here they are in all their glory, the Political Intelligence #EUref fantasy elevens, formed of the grandees, the grafters, the young guns and the crowd-pleasers that are set to dominate our screens and newspaper columns in the run up to the Referendum.

Disagree with our choices? Tweet us @politicalintel or join the debate on the Political Intelligence LinkedIn page. Who would your captain picks be? 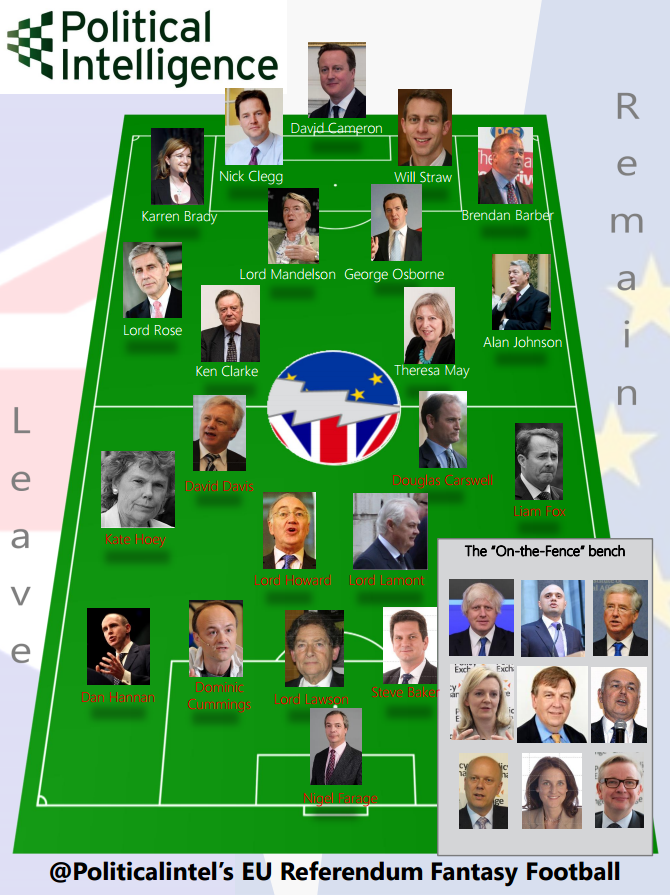 Disagree with our choices? Tweet us @politicalintel or join the debate on the Political Intelligence LinkedIn page.