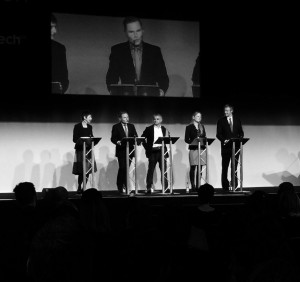 Yesterday saw the five main London Mayoral candidates address hundreds of people from the capital’s tech sector on what they have in store for tech. On the whole there was very little debate, with everyone praising the tech sector and emphasising need to keep London as the leading European hub for technology firms. There was almost universal agreement on the need for cheaper office space and better broadband, more diversity, access to talent and skills, with only some disagreement on the fringes.

Given the fact they are in a campaign, Sadiq Khan tried hardest to differentiate himself from his main rival Zac Goldsmith by explicitly supporting EU membership (Goldsmith is considered a potential outer) and highlighting Tory policies that he said hurt London, such as visa rules and on affordable housing. Zac said he would look after the tech sector like he looks after his constituents and would be best placed to work with Government. Goldsmith added that he would pick up where Boris left off in terms of championing ‘Silicon Roundabout’ and promoting London’s bustling tech scene internationally.

The other three candidates left differing impressions. Green candidate Sian Berry left the audience particularly impressed as she has substantial ‘techspertise’ having worked for a tech start up. She spoke confidently about digital democracy, the need for open data and superfast broadband without having to resort to buzzwords like the others did. She will not win the election, but as Sadiq kindly suggested, she could be an excellent candidate for the ‘Chief Digital Officer’ position that was so strongly supported by all candidates.  Liberal Democrat Caroline Pidgeon spoke passionately about the need to promote diversity in the tech sector, tackle inner city not spots and embrace disruptive technology, but lost a few points after citing MS Word and the word “whizzy” in a discussion about innovation. UKIP’s Peter Whittle did not impress, and besides railing against all the (un-named) EU regulations ‘strangling’ London’s tech firms, made some slightly odd remarks about telephones.

One thing to note, which reflected polling we carried out in 2014 was that whilst the candidates pledged support to the tech sector, they were very quick to criticise Uber and were concerned about some of the challenges posed by disruptive technologies.

So beyond the buzzwords and pledges, what actual policies did the candidates announce?

Goldsmith acknowledged that the Mayor of London did not yield as much power as you might expect, and that in most arena’s outside of transport, housing and policing, the Mayor played a nudging, influencing role, as opposed to an executive one. However, the candidates agreed to do all they could to speed the rollout of superfast broadband and combat not spots. “All they could” would actually equate to quite a bit, and supportive measures would include streamlining wayleave agreements, incentivising utilities to install fibre by removing costly permit schemes, withholding planning permission from developers unless they agree to install superfast broadband in new premises as standard (permitted development rights), and opening up space in public buildings for mobile broadband infrastructure.

Goldsmith and Khan both announced their support for many of the recommendations in the London Digital Manifesto, although it is important to note that not all of these are directly within the Mayor’s power to enact – with some proposals, such as changes to immigration policy and visa controls, requiring alterations to primary legislation. A Tech Talent Pipeline (à la Bill de Blasio’s initiative in New York) was advocated by many of the candidates and all supported the establishment of an Office of Data Analytics and the hiring of a Chief Digital Officer for London. Some other popular proposals would ‘simply’ involve behaviour change and/or effective awareness campaigns – but these would certainly benefit from the Mayor’s support.

Whilst most of the candidates delivered reasonably assured performances, said the right things and agreed that superfast broadband and digital skills were both quite important for the UK’s future, the proof of the pudding will– more than ever – be in the eating.