Johnson on healthcare: what can we expect from the new Prime Minister?

By LondonAugust 13, 2019UK insight
No Comments 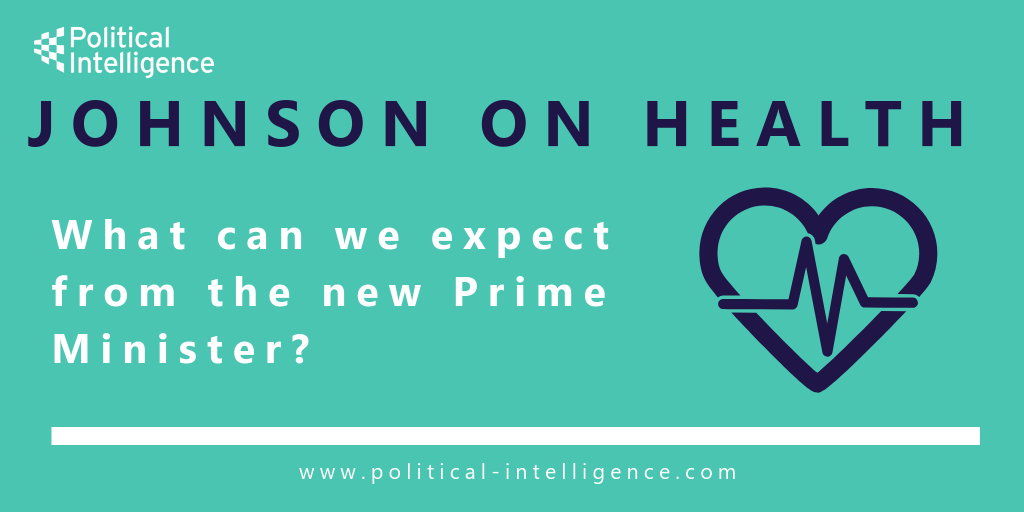 While his campaign was unsurprisingly focused on Brexit, with pledges around technology and business occasionally making an appearance, Boris Johnson’s leadership bid was relatively quiet on his ambitions for the health service and life sciences industry. It therefore came as a surprise to some that since taking office, Johnson appears to have made supporting the NHS a key priority.

Whether this is borne out of a desire to boost a sector that many people feel passionately about protecting in a post-Brexit environment, neutralise Labour’s reputation as the “party of the NHS” or perhaps hold true to the now infamous pledge made on the side of a bus, the new Prime Minister has made a number of recent announcements that give some indication that healthcare is high on the agenda and could be a key focus of Johnson’s premiership. Whitehall sources indicate that there will be more announcements to come when MPs return from recess, suggesting that Johnson’s special advisor Dominic Cummings wants to focus on a sector that will be a top priority at a general election.

On his first day as Prime Minister, he announced on the steps of Downing Street that he would ensure more money reaches the front lines of the NHS and promised to “fix the crisis in social care once and for all”, while also citing the life sciences sector as a prime example of why not to “underestimate Britain”. His sentiments support the indication that the Government are keen to promote the value of the health system and the UK’s prowess in artificial intelligence (AI), genomics and pharmaceuticals as case studies of British success as we prepare to leave the EU.

This will be, by no means, an easy task. Already, the £1.8bn he recently committed towards upgrading hospital facilities and equipment in 20 hospitals has been described by think tanks and health charities as a welcome contribution but a drop in the ocean and a fraction of the true cost of upgrading 20 hospitals (there is already a £6bn maintenance backlog in hospital trusts).

He has also just unveiled plans for a £250 million AI lab to form part of NHSX, a new organisation that is overseeing the digitalisation and data usage of the health service. The lab will bring together academics, doctors and experts in the field of AI to increase its uptake across the NHS and explore ways in which it can be used to improve cancer screenings and diagnose diseases such as dementia.

Johnson, like Health Secretary Matt Hancock, has voiced his desire to utilise health technologies – a sensible move that can support British innovations and drive growth in the life sciences industry while benefiting both patient outcomes and time-pressed clinicians. While we can expect Johnson to give the health service a few more cash giveaways, he will have to be careful in how he chooses to allocate funding.

Research by The King’s Fund published in 2017 found that the £1.2bn of money spent on research and development on innovation vastly outweighed the £50m spent on actually supporting the adoption and spread of innovative new technologies through the health system. Johnson must ensure that developing exciting technologies remains a priority, while also giving much needed support to those parts of the health landscape that do not always grab headlines.

One area that we may expect to see greater focus on is prevention and public health. Hancock is championing the importance of keeping people healthy and out of hospital to ease pressures on NHS services and this is likely to be reflected in Johnson’s future policies. Johnson has appointed William Warr, a doctoral researcher in public health, as a policy advisor and a Prevention Green Paper was published in the last days of May’s premiership, which includes an ambition to go smoke-free in England by 2030, a possible extension of the soft drinks levy and an end to the sale of energy drinks to children under 16.

Despite Johnson’s voicing of an aversion to ‘sin taxes’, the Green Paper was a welcome commitment and bodies from across the health sector are hopeful that the incumbent Prime Minister turns these proposals into policy. However, adequate funding is again essential to seeing the prevention agenda take flight. The Prevention Green Paper did come under criticism from think tanks for failing to address the need to resource local authorities to oversee public health. While funding for the much-loved NHS keeps voters happy, Johnson’s administration must ensure that other areas of the health system can flourish and that local authorities are given the resources to do this at the next Spending Review.

Of course, for now Brexit also remains a top priority and Johnson’s ‘do or die’ approach to leaving the EU on 31 October 2019 with or without a deal has led to a rise in no-deal contingency planning. Despite the fact many of the UK’s medical supplies and devices are sourced from within the single market, Government remain keen to assure the public that the supply of these vitally important products will remain unhindered and Johnson has set aside an extra £2.1bn for preparations, of which £434m will cover stockpiling of medicines and medical products.

While nobody can say for sure the extent to which the health service or the UK’s thriving life sciences sector will be affected by Brexit, it is likely that the future of the NHS will remain a battleground between leading parties long after 31 October has been and gone. If these recent commitments towards health spending are signs that the Government are preparing for a general election, to boost the Conservative’s razor thin majority Johnson must carefully navigate the pressures of harnessing the potential of the life sciences sector, balancing the books and protecting a health service that remains a national treasure to many.