London Consultant Muirinn O’Neill,  reflects on the infighting within the Republican Party 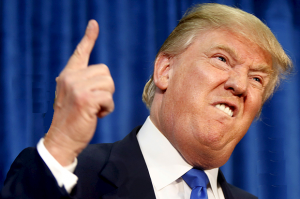 As the sun sets on a week which has left the Republican Party on the brink of implosion, many in the Party are left wondering to themselves how they have gotten to this point. In just eight short months, Trump has managed to flabbergast his political opponents, inside and out of the GOP, and do the unthinkable, by just about clinching the Republican nomination, having carried ten of the first fifteen Republican Primary contests.

Whilst many have been quick to blame the media for ‘creating a monster’ with constant coverage of his outlandish statements, it has been the Republican Party itself and the other Republican hopefuls that have been the key contributor to this meteoric rise. In a race where the other candidates spent huge amounts of time and money tearing each other apart in the hope of becoming the Trump alternative, buoyed by the idea that if they could just face him one-on-one they could come out on top, they have given Trump the chance to rise unchallenged and unchecked. The only hope for the Republican Party now is defeating Trump in the winner-takes-all-delegates states voting on March 15th, blocking Trump from winning outright selection and forcing a brokered convention, where delegates can switch their allegiances. However, this seems unlikely as many have highlighted that this flagrant disregard for the popular vote will serve only to enrage Trump supporters and essentially hand the presidency to the Democrats.

Whilst the Party elite and other candidates seem to have finally swung into action, it seems as if nothing can get in the way of Trump’s rise. Attacks from Rubio and Cruz seem to have done little to damage the front runner and criticism from both John McCain and Mitt Romney seem not only to have fallen on deaf ears, but also serve to bolster Trump’s anti-establishment persona. The top financiers within the Republican establishment have also mobilised, with swathes of anti-Trump ads expected in the coming weeks, but this all may be too little too late. What’s worse, by much of the GOP elite, including Romney, refusing to nominate one single alternative, they have essentially called for a civil war to rage throughout the summer in the hope of outmanoeuvring Trump at the convention, a plan which seems to serve only to deepen chasms within the Party.

Whilst it is easy for us on this side of the Atlantic to scoff at the spectacle of theatrical American politics, the image of a party at war with itself over a controversial leader looks not too dissimilar to our own Labour Party. The conflict between the establishment and grass roots of the party is something mirrored by Corbyn’s Labour, as too are the interventions from senior party figures, for example Blair and Brown, pleading for a candidate who is ‘electable’. The Conservative Party also, despite a comprehensive victory in the last election, does not escape unscathed. Currently splintering over the EU Referendum, Prime Minister Cameron seems to also be experiencing his own kind of grass roots rebellion, whilst a leadership contest is waged behind closed doors.

Alas, it seems as if Party unity is a rare commodity in the current political climate, with the Democrats facing their own splinter movement in the shape of Bernie Sanders. However, it is the Republican Party that stands to lose the most from their in-fighting. With numerous senior party figures vowing that they will refuse to vote for Trump and fears over what Trump on the ticket will do to the 2016 Congressional and State races, the Republican Party could be setting themselves up for an extended political exile.