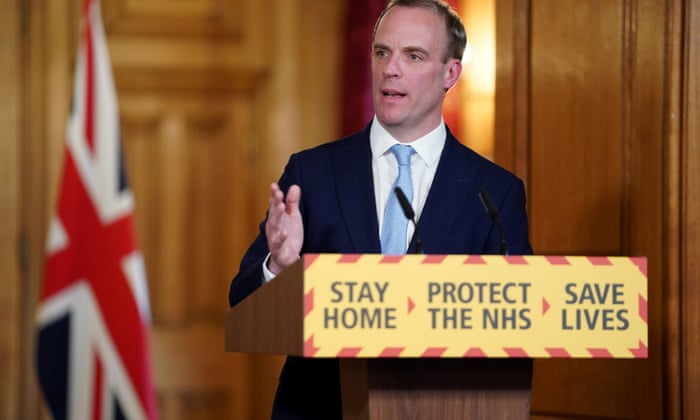 • Dominic Raab gave an update on the Prime Minister’s condition, outlining that Johnson has remained in critical care, receiving a standard supply of oxygen, but that he remained stable overnight and is not on breathing support.
• Amid questions on whether Raab will make the final decision now he is deputising for the PM, he assured the media that there was complete unity within the Cabinet which was bound by collective cabinet responsibility.
• There was a collective call for the British public to continue to follow the Government’s advice and stay home as numbers increased to 55,242 of the British public testing positive for COVID-19 and with the death toll increasing to 6,159.
• Sir Patrick explained that testing capacity was being increased, with 1,900 patients starting clinical trials this afternoon. The Foreign Secretary emphasised that the Government is doing everything it can to ensure that they achieve the aim of 100,000 tests a day by the end of the month.
• Sir Patrick outlined that the current data suggests that the trends are going in a positive direction with no large surges but that this trend will not be confirmed for another week.
• With the lockdown entering its third week – when the PM had committed to review the restrictions, numerous journalists questioned when a decision on its continuation would be made. Raab explained that the decision will be evidence-based and refused to be drawn on whether the lockdown will be extended.

The Prime Minister is in ‘good spirits’ after spending the night in intensive care. Although not requiring a ventilator, he received oxygen treatment. Dominic Raab, the first Secretary of State, was asked to deputise for the Prime Minister ‘where necessary’ and now leads the Government’s response to COVID-19 until the Prime Minister becomes well enough to return to action. Cabinet Office Minister Michael Gove also announced that he was self-isolating today – the third member of the Cabinet to do so.

As the three-week deadline of the lockdown review period looms, the Government is considering how it can viably ease the lockdown. The Government is reportedly modelling various scenarios for easing restrictions. Some floated ideas include easing restrictions region by region so the UK’s intensive care capacity can be used to treat cases one at a time, and another could involve telling those considered most vulnerable to stay isolated for longer.

Despite meeting the criteria, thousands of people have been missed off the Government’s high-risk list for COVID-19. This includes transplant patients, asthma suffers and those with rare lung disease. NHS Digital originally identified 900,000 vulnerable people, but it is reported that doctors and nurses are adding an additional 600,000 people to this list. There is a concern that this has impacted these people’s ability to access food and medical supplies while self-isolating, as supermarkets have been using the list to prioritise vulnerable customers. Those that believe they should be deemed high-risk are advised to contact their GPs.

Parliamentary digital, broadcasting and procedural experts have worked to develop a virtual House of Commons for the end of Easter recess. The Speaker of the House of Commons, Lindsay Hoyle, hopes that the virtual Parliament will be ready by 21st April. Virtual select committee meetings could also take place from 27th April.